How Is Debt Divided During Divorce In Suffolk County? 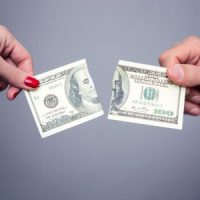 People carry enough debt on their own. They do not usually want to pay for someone else’s. If you are getting a divorce, you likely do not want to be responsible for your spouse’s debts once your case is finalized. Unfortunately, that is a possibility. Many people know that their assets are divided during the divorce process, but so too, are debts and other liabilities. Below, our Suffolk County property division lawyer explains how debts are divided during divorce.

The main factor considered when dealing with debts during divorce is whether they are considered separate or marital property. Separate property includes any assets or debts that were acquired before the marriage. For example, if you bought a car before you were married, you would likely be responsible for paying off any remaining debt on the vehicle. On the other hand, there is a good chance that you could keep the car because you purchased it before getting married.

Marital property refers to any assets or debts that were acquired during the marriage. For example, if you purchased a home with your spouse shortly after the wedding, you would both have certain rights to it, as well as a certain amount of responsibility for the debt. Other common types of joint debt include utility bills, household items, and credit card debt incurred on a joint account.

Exceptions to the Property Division Rules

Although it is important to identify whether a debt is considered separate or marital property, there are certain exceptions to the rule. You may not be responsible for paying certain types of your spouse’s debt, including:

Generally speaking, a judge will analyze the reason for any debt incurred to ensure that neither party has the burden of paying off debt that they did not benefit from, especially when they did not incur it themselves.

Unlike other states, such as California, that follow community property laws, New York is an equitable distribution state. This means that debt will be divided fairly, and not always equally, during divorce. When dividing debt, the court will again consider when the debts were incurred, which party incurred them, and what the debt was used for. A common method for dividing debt is assigning more of it to the party who retains the most property during the divorce.

If you are getting a divorce and are concerned that you will be responsible for your spouse’s debt, our Suffolk County property division lawyer can help. At the Law Office of Joshua Adam Kittenplan, P.C., our experienced attorney can advise on your case and give you the best chance of not being left with your spouse’s liabilities. Call us now at 631-499-0606 or contact us online to schedule a free consultation.

By Joshua Kittenplan | Posted on December 5, 2022
« Can Grandparents Get Legal Visitation Or Custody Of A Grandchild?
How To Enforce A Child Support Order On Long Island »